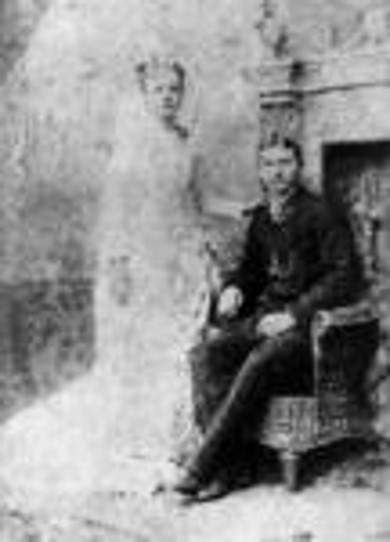 BUROW  Friedrich Wilhelm Ephraim was born 16th February 1867 and died in the General Hospital Brisbane on the 23rd July 1948.

He is buried at the Bethania Lutheran Cemetery.   His parents were Carl Friedrich Wilhelm BUROW and Wilhelmine Ernistine JAHNKE

Carl married  Eda Karoline Wilhelmine FALKENHAGEN on the 15th May 1889 at the Bethania Lutheran Church.

Eda was born on the 22nd June 1868 at Bethania Queensland, and died on the 2nd June 1890 at Waterford.  She is also buried at the Bethania Lutheran Cemetery.  Her parents were Karl Friedrich Wilhelm FALKENHAGEN and Johanna Charlotte Wilhelmine LUDWIG.

The Wedding photo was sourced from “Trove” National Library.

Last modified on Saturday, 22 February 2020 15:15
Tweet
Published in Weddings Pioneers and their Descendants.
Tagged under

More in this category: « Schulz Falkenhagen »
back to top