GOAN Thomas was born in 1855 Ireland and died on the 20th December 1933 in the Mater Hospital.  He is buried at the Dutton Park Cemetery. (Sth Brisbane) His parents were James GOAN and Elizabeth nee McGAVAN.

Hannah was born on the 24th September 1858 at Bulimba and died on the 29th January 1893.  She is buried at Coulson Queensland.  Her parents were Samuel MARKWELL and Mary Ann nee SHEARMAN.

Anne was born 6th September 1856 in Queensland and died 25th March 1928.  She is buried with Thomas.  Her parents were Thomas FRENEY and Maria nee BLUNDELL.

The Wedding photo is from the Queensland State Library. 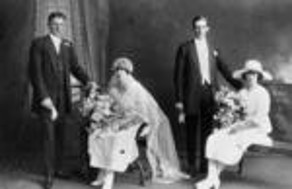 Both are buried in the Esk Cemetery.

The wedding Photo is from Beaudesert & Surrounds Face Book page.

Last modified on Friday, 06 March 2020 14:41
Tweet
Published in Weddings Pioneers and their Descendants.
Tagged under

More in this category: « Miles Franklin »
back to top