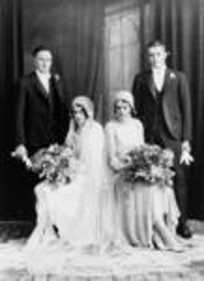 CASHELL  Lillian May (Queenie) who was born on the 29th May 1905 in Beaudesert and died on the 12th Jan 1990 in Grafton.  Her parents were Maurice and Mary Frederika nee DENNIS.

They are both buried in MacLean New South Wales.

Tweet
Published in Weddings Pioneers and their Descendants.
Tagged under

More in this category: « Kratzmann Massam »
back to top